supportPosted on July 9, 2019 Posted in Uncategorized

This post contains a brief description of the fields and options available in the convert tool tab in Vordio 5.5.4

You can browse for or drag and drop a sequence file format you wish to convert here. Depending on the file format some other options will be enabled or disabled depending on if they are relevant to that format. Supported input formats are *.fcpxml (Final Cut Pro X and Resolve), *.xml (Premiere and Resolve), *.adl (Nuendo), *.tl (StudioOne and Nuendo), *.RPP (Reaper), *.sesx (Audition), *.edl (Many NLEs but very limited for audio purposes). Support for some formats is more fully featured than others.

The output folder will default to the same folder as the source file. You can change it if you want the converted output to go somewhere else.

This field is optional and usually not required. It can be useful when the media is not longer in the location specified in the source file. This can occasionally happen when needing to cross platform because file systems are different on Mac and Windows.

This is usually not required because most modern formats include the frame rate. Some older formats such as EDL do not always contain the frame rate so it must then be specified.

If media is compatible with the target format then it will be copied into the converted output folder. i.e. when converting to a RPP then WAV, MP3, AIF files can already be handled well by REAPER so there is no need to convert the media. Some output formats will only allow WAV files so an MP3 would not be copied, it would be transcoded into a WAV instead.

If the media file cannot be handled well by the target format, then the file will be transcoded into a WAV instead. i.e. a video file called MyVideo_001.MOV would have it’s audio extracted into the output folder as MyVideo_001.MOV.wav.

This option is only necessary if all your media doesn’t have unique filenames. i.e. There is more than one file called MyAudio_001.wav but located in different folders. New subfolders with mangled names will be created for each original media path. If you are sure all your media has unique file names then these extra subfolders are unnecessary.

If this is on then any files transcoded into WAVs will have BWF timestamp embedded in the WAV.

Any clips/items that have been disabled in the source format will not be included in the output format. Otherwise they will be included by disabled (muted).

Any clips/items will be organised into tracks based on the number of channels the clips require i.e. mono, stereo, surround items will not appear on the same track.

Include video as empty items

For sound design it can be handy to have a ‘picture cut track’ that show where each shot begins and ends. The items will be empty (won’t link to any media) but instead just serve as a reference. This tutorial video shows using a picture cut track.

Include all takes in auditions (FCPX only)

FCPX has a feature where a clip can have multiple takes. Usually you only want the active take used in sequence but there may be times where you want all takes added to the converted output sequence.

Most NLEs allow two types of markers – Sequence markers (also called chapter markers) and markers on individual clips/items. Usually you only want to include sequence markers because also including item markers can result in a very large number of markers in the output project which can be too messy.

XML uses a separate track for each channel of audio. This can be inconvenient when converting because a stereo item would be split into two mono items, one item for each left & right channel. This option attempts to detect this situation and create only one stereo item which is usally easier to work with.

This option attempts to minimise the number of tracks in the converted sequence to save screen space. However, depending on the type of edit, this could also make the result more confusing because items may have moved to a different track to save space.

Colors as roles (Premiere only)

This option will organise tracks into parent folder tracks based on the color of the clip in Premiere. This can be useful if the editor uses colors to categorize clips in their workflow. This is similar to the concept of ‘roles’ used to categorise clips in FCPX.

This option will give converted items a unique color based on which media file that the item uses. This can be very useful for quickly identifiying which items may need similar treatment. i.e. two items that came from same piece of recorded dialog are likely to need the same treatment such as levels, EQ and noise reduction. The colors may look random but they are not. They help you see similar problems.

FCPX organises clips by roles which can have subroles. i.e. Main role “dialogue” may have subrole “Pete” for Pete’s dialogue channel. In this case it is useful to have two levels of nested parent tracks in the converted output to separate out dialogue from different actors on radio mics. However there are also some situations where subroles can create too many folder tracks. One situation is where the edit is of a live band recording and the audio recorded from the desk has 32 channels. Having an extra nested folder for each channel would create way too many subfolders.

supportPosted on April 23, 2019 Posted in Uncategorized

Vordio 5.5.4 is now ready for download. This release is mostly bug fixes.

supportPosted on August 2, 2018 Posted in Uncategorized

A license is only needed to generate the full timeline (longer than 3 minutes) at the sound editor’s end. There is no restriction on media collection at the NLE end.

Steps 1 & 2 at the NLE side (no license installed)

1. A client can use the free version to pack up media (but RPP will be incomplete if longer than 3 mins). They should check nothing is left in queue as that means those items were offline.
2. They can zip up the folder (zip reduces the upload to about 60% size) to send you PLUS the XML.

You should now have a new RPP that is complete and links.

supportPosted on August 2, 2018 Posted in Uncategorized

Vordio 5.5.3 is now available for download. This is a free update for all 5.x users.

supportPosted on May 22, 2018 Posted in Uncategorized

* New option “Nested folder tracks as subroles” that can be turned off to reduce track count if you have a huge number of subroles.

* Fix for large multichannel files with 10 or more channels being mapped incorrectly.

supportPosted on March 19, 2018 Posted in Uncategorized

Vordio 5.5.1 is now available for download. This is a free update for all 5.x users.

* Items, points and markers that are out of range of the change list source regions are now ignored. This enables having multiple reels in a project but only reconforming the relevant reel.

* Added option to remove unused markers (markers that could not be reconformed). Only markers will be removed currently, regions are still left.

* Added regions are now prefixed with “R:” This allows easy filtering of the reconform check list in the marker manager.

supportPosted on February 16, 2018 Posted in Uncategorized

Vordio 5.5 now available for download here (or via the direct download button on Vordio). It is a free update for all 5.x users.

* Fix for FCPX XML parsing error when asset has no name

* Optional search folder added to convert and reconform which is useful if media not in original location. 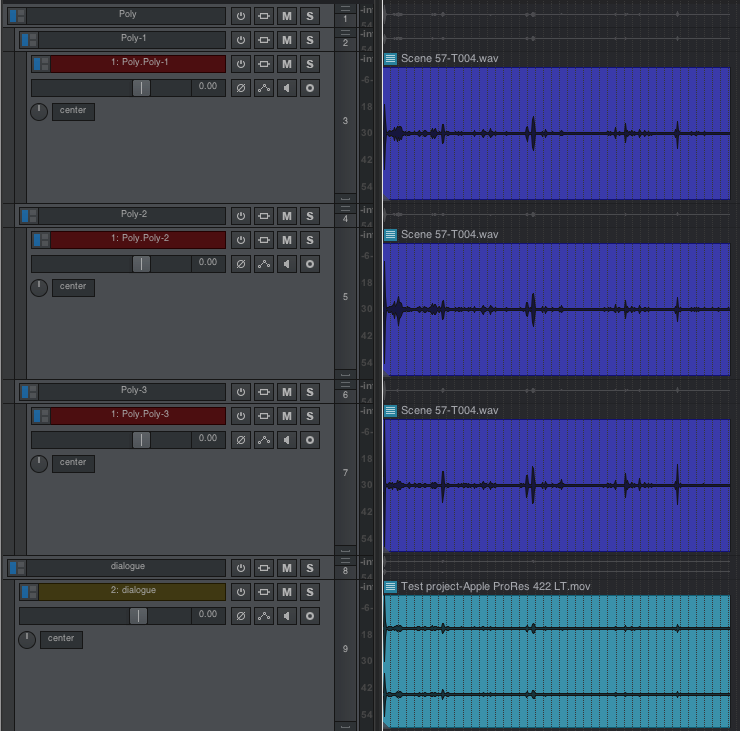 supportPosted on December 8, 2017 Posted in Uncategorized

This allows you to apply a change list to a native REAPER project file (RPP).

NOTE: The new compare tool can be used to generate a change list if you do not already have one. 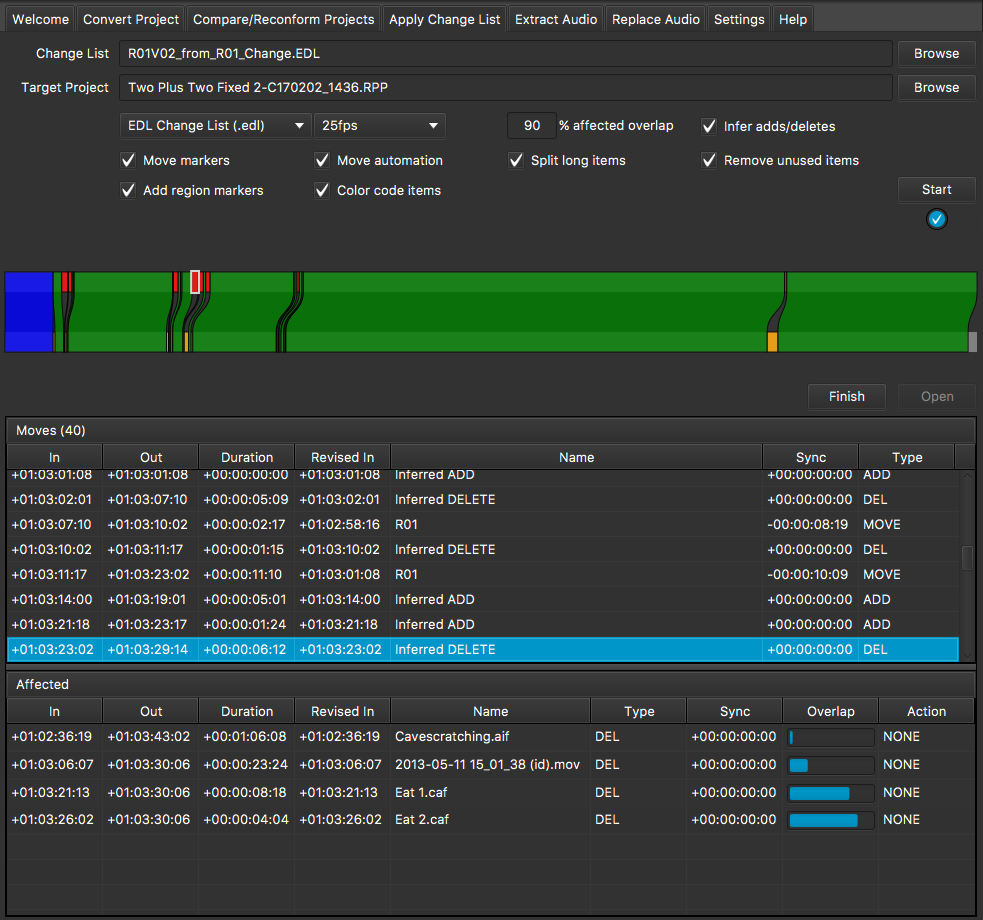 supportPosted on December 8, 2017 Posted in Uncategorized

A new compare tool has been introduced in Vordio 5.4.

This tool allows you to compare two XMLs or EDLs to produce a region change list as VCL file (vordio change list) or an EDL file (edit decision list).

A VCL file can then be fed into the “Apply change list” tool to alter a REAPER project or fed into my free hammerspoon script that can be used to apply the changes to various other DAWs on MacOS.

The examples below use my hammerspoon script to automate applying the change list to other DAWs.